Is the Netherlands a megacity?

The Netherlands is one of the most densely populated regions on Earth. But it’s not considered to be a megacity, which, according to Wikipedia, is defined as “a metropolitan area with a total population in excess of ten million people“. Although the Netherlands has a population of almost 17 million, its metropolitan area, called ‘Randstad‘, consisting of the cities Amsterdam, Rotterdam, Utrecht and The Hague combined, has only 7.1 million inhabitants1.

Before looking into the Randstad in more detail I would first like to zoom out to see things in perspective. Figure 1 shows a global map of those regions on Earth where more than 200 persons live per square kilometer2. It becomes immediately clear that China and India have huge connected urban areas. Shanghai, for example, is considered to be the largest city in the world. The Netherlands, but also other urban areas in Europe and the USA look like tiny spots compared to what’s going on in Asia. This map doesn’t show the actual population density though and most parts of these insanely large urban regions in India and China have much lower population densities than for example Tokyo, the largest megacity in the world.

Figure 1. The red colors were derived from the LandScan dataset, downloaded from the Populated Places page of the Natural Earth website. The background data is from OpenStreetMap. The map was made using QGIS.

Let us now zoom in to the Netherlands and surrounding countries. Figure 2 shows the ‘Randstad’ region in the Netherlands (in yellow) and for comparison the metropolitan areas of London, Brussels and the Ruhr area in Germany. Again, only regions where more than 200 persons live per km² are shown. Of these only London is considered to be a megacity, ranking on the 25th place (2015). Looking at the Netherlands the so called Randstad region turns out to have a ‘Green Heart’ (Groene Hart). This however is not a huge park like Central Park in New York, it consists of smaller cities and villages, some lakes, the major airport Schiphol and lots of agricultural land. If you sum up the population of all the yellow regions you get a size of 4.4 million people3. That’s different than the 7.1 million mentioned on Wikipedia. So let’s forget about this global data and look at some Dutch data instead.

On the Dutch Central Agency for Statistics website I was able to find 2014 data of population per municipality. The blue colored lines of Figure 3 show all the municipality boundaries of the Randstad, including the Green Heart4. When summing up the population size of these municipalities I get a total of 6.2 million people5, so not enough to get to the 10 million needed to be classified as a megacity. Adding the green municipalities, with cities like Alkmaar and Almere, gets me to 8.1 million. So still not enough. When adding the red municipalities, with the cities Nijmegen and Den Bosch, I get 9.5 million. Almost there. Finally, after adding the purple municipalities with the city of Eindhoven6 gives a total of 10 million. If this would ever be regarded a megacity it would probably be the greenest one, by far. 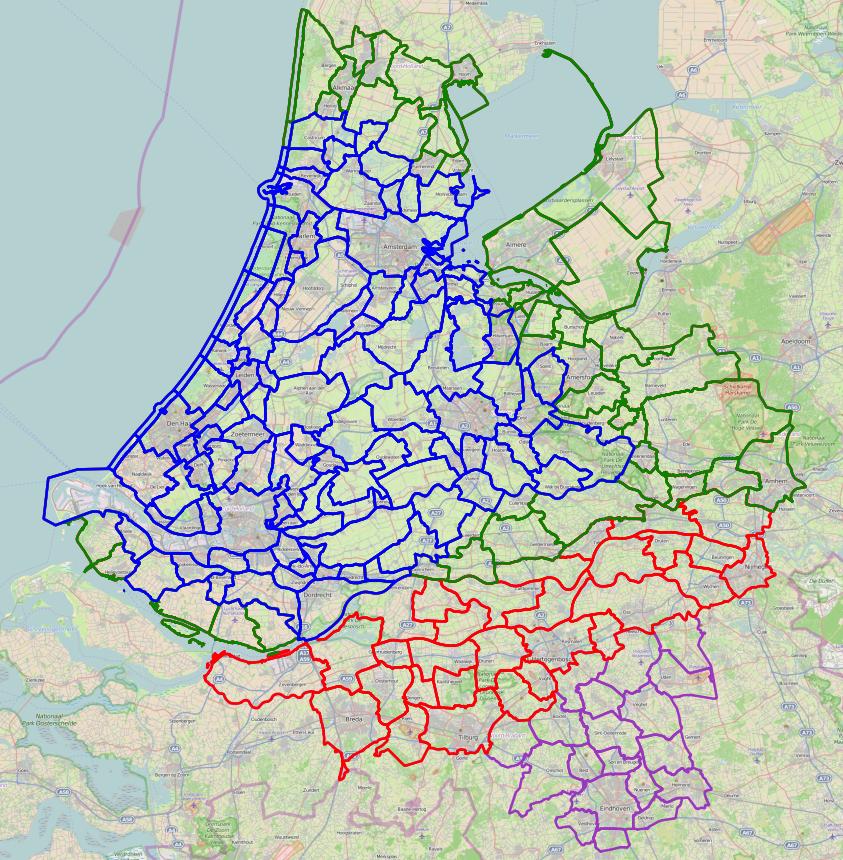 Figure 3. Dutch municipality boundaries derived from the population per municipality data from 2014 by the Dutch Central Agency for Statistics. For an explanation of the map see the text.

To again provide some perspective I would like to show Figure 4, a map of Shanghai (in yellow), using the same scale as Figure 2. And Shanghai is only a fraction of the total urban area in China. This makes me wonder what is the point of this little exercise. Why would it be interesting to classify the Netherlands as a megacity? Well, take the C40, ‘a global network of large cities taking action to address climate change by developing and implementing policies and programs that generate measurable reductions in both greenhouse gas emissions and climate risks‘. Only Amsterdam and Rotterdam are shown on the website, being regarded as ‘innovator cities’. So although Amsterdam and Rotterdam probably work together, to the outside world they are seen as two different cities. But is that true? Isn’t there something of a ‘Nethercity’ going on? The Dutch railway system between Amsterdam, The Hague, Rotterdam and Utrecht is like a subway system; a New York subway train goes every 10 minutes, a Dutch railway train every 157.

The Randstad to me is like an embryonic megacity which never came to be, frozen in time. It therefore still has ancient city centers which attract lots of tourists each year. Just imagine the former Nieuw Amsterdam buildings would still be there in lower Manhattan. That’s impossible, it would have hampered the growth of the city. Instead, during its period of rapid growth New York underwent a cycle of demolition and renewal, ever building higher and higher. The same is happening in China. A Chinese friend of mine told me that the house she grew up in isn’t there anymore. An apartment building was built at the same location and she and her family now had more neighbors than before. This happened again and the apartment building was exchanged for an even higher building. That’s rapid growth! In the Netherlands, on the other hand, this period of rapid growth never came to be. The urban landscape is still growing but not so much as in China.

So how can we then define the Netherlands? Is there something else, something valuable, which the Netherlands is, and Shanghai and other megacities are not? The total population, the total area and the population density of a city are metrics which don’t say much about the quality of life of city dwellers. It also doesn’t say anything about sustainability. Instead we need the answers to questions like ‘how green is a city?’, ‘how circular is a city?’, ‘has the city been built for cars or for people?’. Although we are still far from having implemented a circular economy we Dutch have much more green close at hand than the average megacitydweller. As the Sustainable Urban Delta initiative website says: “THE NETHERLANDS, THE GREENEST CITY IN THE WORLD“. We live in a densely populated region but you can still take your bike and within half an hour find yourself away from the city life.

So my wish for the Netherlands is that it should grow, not in the amount of buildings, but in quality of life and how circular its economy is functioning. A city should be a life support system designed to function for many generations. We are supposed to be a ‘developed’ nation, but there is lots of work to be done to make Dutch cities circular, green and perhaps even function like forests? Maybe we shouldn’t talk about Mega Cities anymore, but instead talk about Omega Cities, with O standing for circular. We need Omega Cities and I hope the Netherlands to be on the forefront.